February 2020 – Onpoint is excited to have collaborated with Washington State’s Office of Financial Management (OFM) on the state’s first comprehensive analysis of annual primary care medical expenditures. The data source for this report, “Primary Care Expenditures,” was the Washington All-Payer Health Care Claims Database (WA-APCD), which is maintained by Onpoint and recently transitioned from OFM oversight to the Washington State Health Care Authority.

During the 2019-2021 biennial state budget process, Washington’s Legislature directed OFM to determine annual primary care medical expenditures as a percentage of total medical expenditures. Onpoint was asked to calculate the expenditures and produce the analyses to help inform OFM’s study. This study follows similar reports produced in Oregon and Rhode Island, with the shared goal of helping policymakers better understand the current level of investment placed in primary care so that they can better guide future healthcare investments.

The Washington State analysis found that primary care expenditures accounted for 4.4% to 5.6% of all medical expenditures overall in 2018, depending on whether a narrow or broad definition of primary care providers and procedures was used. 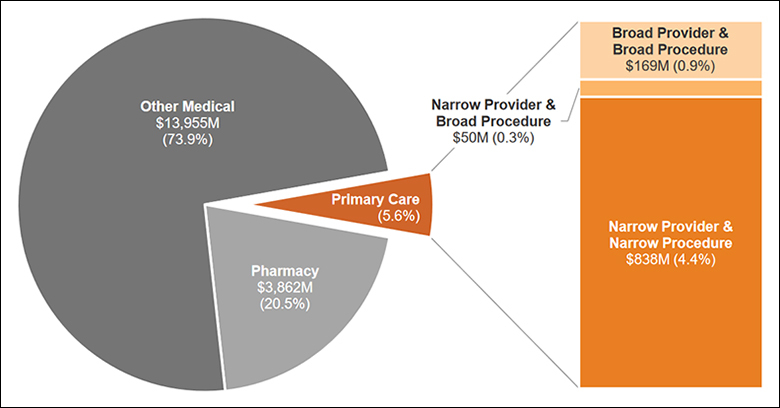 The results of this report provide Washington State with a baseline to use when monitoring future healthcare investments and initiatives and will serve as a launching pad to facilitate the state’s future research into understanding how it can best support the health of its population.

The “Primary Care Expenditures” report is based on data from the WA-APCD, a comprehensive source of claims that includes more than six million covered lives across more than 50 commercial, Medicaid, and Medicare payers. The report suggests several goals, including:

Thank you to National Association of Health Data Organizations for an engaging Seattle workshop! We had a great tim… https://t.co/78UnwmgIDt
In collaboration with clients in multiple states, we have developed and released a new APCD Snapshot reporting tool… https://t.co/bXfN5TrwXG
This fall, California’s Department of Health Care Access and Information announced the selection of Onpoint Health… https://t.co/BQNcwlSK8X
Exciting news in our ongoing efforts to protect the community against COVID! https://t.co/9gzT8g7Jfl
Great thoughts from the Commonwealth Fund to further support the case for race and ethnicity data efforts. https://t.co/xjReeB10F4
Some planning discussions from the White House as Pfizer-BioNTech work to obtain approval for vaccine roll-out to y… https://t.co/KbcAfffLdn
Great, interactive resource from NASHP outlining how each state is spending their allocated #COVID19 rescue funds. https://t.co/qzWpbsHrS4